Successful roll-out of the Porsche Carrera Cup Benelux at CM.com Circuit Zandvoort
No less than 49 Porsches 911 GT3 Cup of the latest model generation (992) came into action today at CM.com Circuit Zandvoort during the combined roll-out of the Porsche Carrera Cup Benelux and the Porsche Mobil 1 Supercup. Under ideal conditions with bright sunshine, teams and drivers could experience their new cars for the first time. The reactions were without exception positive, no one could have wished for better preparation for the coming racing season!

It was an impressive sight, the 49 brand new Porsche 911 GT3 Cup (type 992), which were tightly lined up in the pit lane of the Zandvoort circuit. A unique moment, too: never before had so many Porsches of the new Cup generation been together on one racetrack. Porsche Motorsport and The Driving Force, the organization behind the Porsche Carrera Cup Benelux, had planned the joint test day to offer drivers and teams from the Porsche Carrera Cup Benelux and the Porsche Mobil 1 Supercup the opportunity to drive the new race cars in a safe environment. can try it out. An extensive team of experienced technicians from Porsche Motorsport in Weissach was present to provide support.

Four sessions were available for both the Porsche Carrera Cup Benelux and the Porsche Mobil 1 Supercup, allowing all participants to complete a considerable number of laps. There were also start exercises on the program. The lap times on the 4.259-kilometer circuit were already directly below the times of last year, even though the cars are still brand new. With an output of 510 hp, the latest generation of the Porsche 911 GT3 Cup is, therefore, the most powerful Porsche 911 GT3 Cup of all time.

With competitions in Germany, France, Asia and North America plus the international Porsche Mobil 1 Supercup, the Porsche Carrera Cup Benelux is one of the first championships in which the new Porsche 911 GT3 Cup is entered. The Benelux drivers were enthus 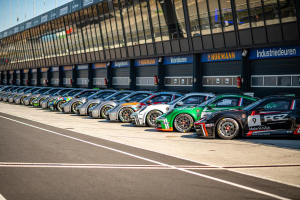 iastic. “Great, I enjoyed today”, Glenn van Paris beamed, driving for NGT Racing in the Pro class. “I’ve been able to do quite a few laps already. A lot of power, a lot of grip… Just great! ”

“The first impression of the car is that it is much more aerodynamic than I am used to,” said Floris Dullaart, who competes for the GP Elite team in the Pro-Am class. “He’s also a lot less distorted than I’m used to, so you can get on the gas much earlier. That takes some getting used to, I can certainly be one and a half to two seconds faster than I am now. I am very satisfied, great fun! ”

Andrey Mukozov will start for the Luxembourg team DUWO Racing, also in Pro-Am. He stated: “The new car is incredible: a lot of grip on the front axle, a huge step forward. The cockpit display provides plenty of information, and the new steering wheel feels pleasant. Driving is a lot easier, great! ”

Huub van Eijndhoven, who, after good results last year in the Pro-Am class, will switch to the Pro division for the coming season and will drive for #TeamPGZ by JW Raceservice, was also positive in his conclusion: “The new car is a lot more direct and stable. You have to drive it a bit more precisely, but the wide tires already give you a lot more grip, which means that the lap times are also considerably lower. ”

Olivier Aerts, Series Manager of the Porsche Carrera Cup Benelux, could of course also look back on the test day with satisfaction: “I am very satisfied”, he said. “It was wonderful to be able to experience the roll-out here together with the Supercup. The sight of 49 cars lined up in the pit lane is an experience that is far from every day. My thanks to everyone involved for their commitment and specifically to Porsche Motorsport for the technical support. We are one step closer to the start of the season. ”

On Friday, April 16, the official “Test & Media Day” of the Porsche Carrera Cup Benelux will take place at the Circuit de Spa-Francorchamps in the Belgian Ardennes. The first racing event of the season is also planned there from April 29 to May 1, with the Porsche Carrera Cup Benelux in the support program for the FIA ​​World Endurance Championship. In total, the season consists of six events of two races each.