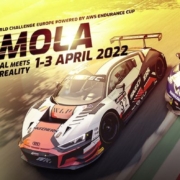 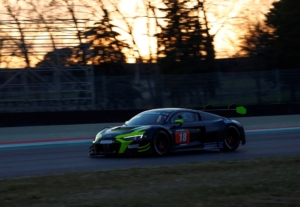 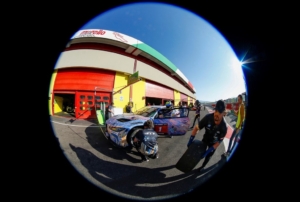 “What an emotional rollercoaster!”, said Team Principal Bobby Oergel. “The chances were looking strong to a podium finish, sadly a broken exhaust collector killed the ability to

produce the type of lap times to make that happen. Steven, Josh and Jonathan did a great job and sadly it wasn’t our day to put it in the books with the #11 car.”

Weather conditions played an important role for all teams and drivers competing in the 70th edition of this mythical 12-hour race, with high temperatures taking a toll on drivers and 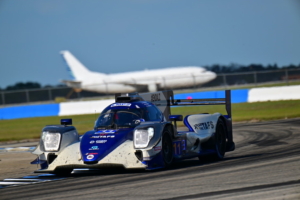 ther tough race for the #11 car.”, said Jonathan Bomarito. “We are making progress as a team and I’m looking forward to the next race at Laguna Seca. Congrats to the #52 car and crew,

they had a great race!”, Bomarito finalized.

The next event in the WeatherTech SportsCar Championship is the Hyundai Monterey Sports Car Championhsip Presented by Motul at WeatherTech Raceway Laguna Seca, next April 29 .

March 22, 2022.- Sebring, Florida. PR1/Mathiasen Motorsports won the 70th Edition of the Mobil 1 Twelve Hours of Sebring Presented by Advance Auto Parts in the LMP2 class, with the #52 Wynns/RainX/4Horsemen/Client Command, after a dominating performance by drivers Ben Keating, Mikkel Jensen and Scott Huffaker last Saturday at Sebring International Raceway, finishing a lap ahead of their second-place competitors.

The heat and humidity at the Florida venue, became critical factors for all teams and drivers competing in the 70th edition of this mythical 12-hour race, that also serves as the second round of the IMSA Michelin Endurance Cup.

“It was so much hotter than other years.”, said Scott Huffaker. “We were able to use that to our advantage. I think some other teams really struggled with their drivers and the heat, and we were able to be a little bit stronger in that sense, it helped give us the win.”, Huffaker added.

“This Sebring win is likely the toughest I’ve seen with competitors and the tough weather conditions for all the drivers and teams.”, said Team Principal, Bobby Oergel. “For me it’s the hardest event on the calendar and I’m so thankful and proud of the drivers and team to win this event.”, he finalized.

Ben Keating, who also raced in the 1000 Miles of Sebring WEC race held on Friday March 18th, started the 12-hour race from the pole position. “I am still just exhausted. But it is a happy exhausted.”, Keating sa

id. “I did 3 hours in the WEC race on Friday and 3 hours in the IMSA race on Saturday. Sebring is a very physical track, that’s tests both man and machine. Over Friday and Saturday, I burned over 11,000 calories, and I can’t eat enough to catch up. I don’t remember ever being this drained energetically”, he added.

“This was a team win, for sure. We all pulled together to do our job perfectly and this was the maximum result. I am so proud of everyone on the team. I was really happy with my performance behind the wheel. The car was amazing. All the drivers were quick. We have close to 100 guests there from Wynns and 4 Horsemen. It was just perfect!” Keating finalized.

Last Saturday’s win becomes the third-straight Twelve Hours of Sebring win for the California-based team, and third-straight win for Scott Huffaker, as well.

“This was a very special win for the team, being that is three in a row for them, and me being a part of that, means a lot.”, said Huffaker. “Everything came down to being consistent, having flawless pitstops, goo

d strategy, keeping our nose clean. Everyone just did their job. There was no particular one thing that stood out, that made us the best, but it was a combination of everything, which was really cool to see and it was really special to be a part of.”, Huffaker concluded.

For drivers Mikkel Jensen and Beating, this was their second-win at Sebring with the team. “Amazing win to get this second one in a row for the team that’s it’s an amazing achievement.”, said Mikkel Jensen. “We 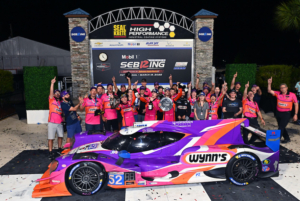 did everything as we should, no mistakes. Everything went smoothly. All competitors got into trouble and we benefited from staying out of trouble. Which was the plan. That’s how you win endurance races.” he added.

The #52 Wynns/RainX/4Horsemen/Client Command returns to action for the round 3 of the IMSA Michelin Endurance Cup at the Sahlen’s Six Hours of The Glen, next June 23 – 26th.

March 14, Sebring, Florida.- After a 4th place finish at the 24 Hours of Daytona seven weeks ago, the #52 Wynns/RainX/4Horsemen/Client Command Oreca 07 LMP2 will be at full speed in Sebring for the 70th Mobil 1 Twelve Hours of Sebring Presented by Advance Auto Parts on March 19. The two-time LMP2 champion at Sebring, will fight to repeat their past success with drivers with drivers Ben Keating, Mikkel Jensen and Scott Huffaker.

This year, fifty-three cars are entered – an increase of 16 cars from a year ago – in the mythical 12-hour race that also serves as the second round of the IMSA Michelin Endurance Cup. “I feel pretty good going into the 12 Hours of Sebring,” said Ben Keating. “There are many more competitors this year, and those competitors are better than they were last year. However, we are coming into the race as the defending ‘Wynner’, and that is a pretty good position!”.

“Our car and our drivers were quick at Sebring last year and I don’t expect anything different for 2022. This is a home race for WYNN’S and they will have a bunch of people at the race. I hope to celebrate with them at the end.” Keating finalized.

“Sebring, is one of the best tracks of the year,” added Mikkel Jensen. “Last year we had a very strong car, very strong teammates, so I think we have a good package. The field is strong, we are seven cars now, so i

t’s a big increase from last year. 7 strong cars with good drivers, good line ups, good teams, so it will be a tough one so I hope we can defend our win from last year. We will do whatev 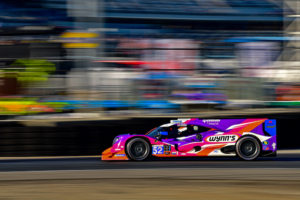 takes, to try and defend it!” Jensen concluded.

“We are all very excited to get back at the track and especially to Sebring as it’s been a great place for our team over the years.” adds Bobby Oergel, team principal. “Saying it’s great is kind of a bitter sweet as I personally find this race to be the toughest on the calendar, that makes us all want to add another Sebring to the ‘Win’ column. The crew has done a great job getting things turned around from Daytona over the last month and I know our drivers have been working hard to prepare for this as well. With Ben doing the WEC 1000 Miles of Sebring and the IMSA Twelve Hours of Sebring races within 24

hours of each other it’s going to be exciting to see him pushing his abilities to the limits around this place!” Oergel finalizes.