March 23, Sebring, Florida- After starting from pitlane and serving an early drive-through penalty, the #52 Wynns/Rain-X/Four Horsemen/Max Connect/Client Command/Valkyrie.ai Oreca 07 LMP2 went on to take its first victory of the season at the 69th Mobil 1 Twelve Hours of Sebring presented by Advance Auto Parts. Drivers Ben Keating, Mikkel Jensen and Scott Huffaker made up for a heart-breaking Rolex 24 with a dominant victory at the grueling 12 hour race.

This is the third win in a row for PR1/Mathiasen Motorsports at the Twelve Hours of Sebring, and it sets the team and drivers up as the championship leaders in the LMP2 class with 382 points.

The PR1 crew will continue to defend their lead after an almost three-month hiatus at the Detroit Grand Prix which will take place June 5-6. 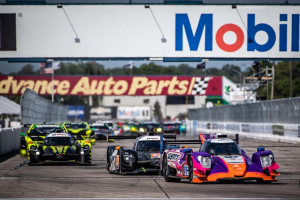 Driver
#52 PR1/Mathiasen Motorsports Oreca 07 LMP2
“What a great race! We had a perfectly clean race, and we were all quick in the car. The PR1 team did a great job. It was a full team win. To me the big moment that decided this race for us was early in the morning warm up, when Mikkel noticed that something was

weird in the suspension. We had to go back to garage to replace a rear upright. This caused us to miss the recon lap, which meant we had to miss the start of the race and start from pit lane.

Sebring is the second race in the North American Endurance Championship. There were points awarded at the 4hr Mark, the 8hr Mark, and the 12Hr Mark. Not only did we score 1st place points in every segment, but I think each of the three drivers got to bring the

car to the points in different segments. I know for me, driving to 1st place points at the 4 hour mark was a special part of the race.

The last 15 minutes of the race were much much closer than we had hoped for. We had built up almost a 3 minute lead and had all of it eaten up under a late Safety Car. As it turned out the 2nd place car was able to get the fuel they needed AND pull right up on our tail. The last fifteen minutes were not easy, but Mikkel kept us in front for the win. ‘Wynning’ is what this team is all about!”

Mikkel Jensen
Driver
#52 PR1/Mathiasen Motorsports Oreca 07 LMP2
“Starting from the pit lane with a drive through on top made us having a hard time in the beginning of the race. Ben did great to gain back and bring the car in the lead. After Scott and I could control it from the front and pulling a gap to P2.

I got nervous at the end having P2 right on my tail at the restart. We had been leading all the way through, so to give it away in the end was not an option! Super happy to get my first Sebring 12h win, and credits to the whole team for a faultless job! Can’t wait for the next one at Watkins Glen!” 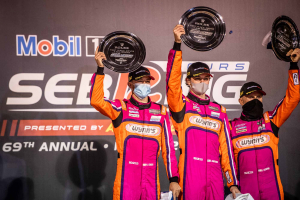 Driver
#52 PR1/Mathiasen Motorsports Oreca 07 LMP2
“I’m very happy with the result. The team performed amazing all weekend and can’t thank them enough for all their hard work. It was very exciting race!”

#52 PR1/Mathiasen Motorsports Oreca 07 LMP2
“What an exiting race! The last 20 minutes left us on the edge of our seats. The car performed flawlessly all day after repairing a problem during warm-up. I want to thank our drivers and crew for a job well done. I’m so glad we were finally able to travel to a race once again and witness our third win in a row at Sebring.”

Bobby Oergel
Team Principal
#52 PR1/Mathiasen Motorsports Oreca 07 LMP2
“What a hard-fought win that was. We had an issue in the warm-up that caused us to miss the recon and start from pit lane nearly a lap down. Turning that into the win was off the charts! Ben, Scott and Mikkel along with the entire crew did such a great job again. I cannot wait to get to the next event.”

Wynn’s® USA has built a reputation on pushing the boundaries of endurance, speed and performance for over 80 years. With a range of additives to prevent and solve problems that affect the operation of the engine, using Wynn’s® for preventive maintenance is the alternative to expensive mechanical repairs and maintaining optimal engine performance. That’s why those who demand the best depend on Wynn’s®.

For the last 40 years, Rain‑X® has provided drivers with products to help them outsmart the elements. With our Original Glass Treatment™ water beading technology, Wiper Blades and Glass Cleaners; Rain‑X® leads the automotive aftermarket in glass care.

In recent years, the Rain‑X® portfolio has expanded to include other types of car care products such as our Car Washes, Waxes, Bug & Tar Removers, and Headlight Restoration Kits. All Rain‑X® products are designed to help keep our customers a confident step ahead of Mother Nature on the road.